Pinochet, historical fiction, and us 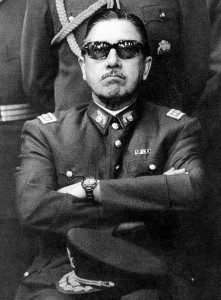 An article on io9.com advised authors of alternate history novels to bring their stories up to the present day. Author Terry Bisson advises, “If you don’t bring your alternative history up to the reader’s present, then you leave out half the fun.” I don’t believe this is necessary. The past itself offers relevant lessons for the present.

by Heraldo Muñoz is one of the books I read as I was writing Doria. I recently finished rereading it when the following quote caught my attention.

Looking back, we can see that Pinochet was partly our own creation. The polarization of Chilean society, the unrealistic demands of the left for radical change from a government elected by a plurality, the ideologization and inflexibility of a formerly pragmatic political center, and the reaction of an uncompromising right that opposed change and defended its privileges — all contributed to the breakdown of Chilean democracy and the emergence of Pinochet.

Isn’t this the political situation we have now in the United States? President Obama is attacked as viciously by the left for not being liberal enough as he is from the right for being too liberal. We have a widening gap between rich and poor; the left and right; the urban, suburban, and rural. The same issues that plague us today were plaguing Chile forty years ago. If we don’t think that what happened to Chile would happen to us, remember that Chileans considered their own society civil, stable, and based on the rule of law.

This is the type of insight that historical fiction and alternate history can give us. They show us how we got where we are, and how we can avoid the same mistakes we made in the past. The best historical fiction and alternate history can be as relevant as if they happened today. All those “if the Nazis won World War II” books can give us insight into the current situation in Europe — with Germany and France taking the lead in trying to save the European economy. All those “if the South won the Civil War” books can help us understand the political divisions in our country today.

What can Pinochet and Chile teach us? In Doria, I wanted to show the importance of people overcoming their divisions to save themselves from disaster. One of my characters tells his political enemy, “I would like to think that our love for our country is greater than our hatred of each other.” By pulling together, they are able to rebuild their country and face an even greater enemy.

So, it isn’t necessary to bring historical fiction or alternate history to the present time. Any good book, no matter what time it is set, gives us something insight into our world and our lives.