Q & A with Joseph Carrabis

One benefit of social media is you meet some wonderful people. One of them is author Joseph Carrabis. He has been everything from a long-haul trucker to a chief research scientist. He has taught internationally at the university level; holds patents in a base, disruptive technology; created a company that grew from his basement to offices in four countries; and helped companies varying in size from mom-and-pops to Fortune 500 companies develop their marketing. Most of this bored him. But give him a pen and paper or a keyboard and he’s off writing, which is what he does full-time now.

His most recent novel, The Augmented Man, was published in March 2021 by Sixth Element. In this novel, Captain James Donaldson believes he found the way to create the perfect soldier: Take a survivor of childhood abuse because he believes they can endure the horrors of combat without suffering PTSD. Augment them physically, chemically, and biologically until they become inhuman killing machines. Then expect them to die in combat because they are considered too dangerous to return to civilian life. One of those soldiers is Nicholas Trailer. He survives a brutal war in South America and later resurfaces in an act of violence. Donaldson must decide whether to destroy or rehabilitate Trailer, but he is not prepared for what Trailer reveals.

I asked Joseph about his book and his approaches to writing. 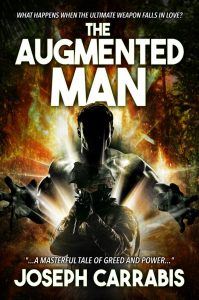 You write in a number of genres, including poetry, children’s books, non-fiction, and science fiction. Which is your favorite to write? Which has been the most challenging?

I don’t have a favorite, really, as I never set out to write to a specific genre. Much like Gahan Wilson’s statement, “I only paint what I see,” I only write what’s in front of me.

What was your inspiration for writing The Augmented Man?

In the early 1990s, I was active in the psychotherapeutic community and studied trauma. My speciality was childhood trauma, and my studies often overlapped with other types of trauma, specifically combat PTSD. There were so many connections between how these types of trauma were demonstrated by survivors, I started sharing my findings with others. These findings were largely ignored, in part because society wasn’t yet comfortable looking at itself through the necessary lenses.

Because I couldn’t get anyone to pay attention, I took my findings and wrote The Augmented Man. Now the findings are part of the therapeutic literature.

Who was the inspiration for your main character, Nicholas Trailer?

All my characters are amalgams of people I’ve known or experienced.

On your website, you said it took you 31 years to get The Augmented Man published. What kept you going through this long process from writing to publication? What did you learn along the way?

There is a saying in Scots Gaelic which translates to “God fears a patient man.” I learned to play the long game and always believed my work would catch on. I did keep writing through all those years, simply not full time every day.

Specific to those thirty-one years? A lot about myself.

That’s a tough one. I wouldn’t classify it as agents or editors, as I’d classify it as competent or incompetent people. Any feedback that is specific and includes suggestions on how to improve the work is excellent, but that “specific and includes suggestions” part is hard to find (my opinion). I tell writers/authors to find people who can critique their work as work regardless of their personal feelings towards the subject matter. For example, I don’t read romance, so I’m not able to tell someone if they’ve written a good romance. However, I do study and work hard to perfect my use of character, action, dialogue, mood, tone, atmosphere, scene, plot, setting…and can tell what’s working and what’s not in their story and provide suggestions. I’m part of a critique group currently and the members repeatedly tell me: 1) they’re in it for my critiques and 2) to read what I submit because they study it to learn how I do things.

High praise from one’s peers, that.

You talk about the importance of surprise in a story, and you were praised for that in a number of reviews. What do you think makes a perfect plot twist?

Interesting question, because my current work-in-progress has lots of (to me) plot twists. The perfect plot twist is written when the reader accepts the twist and keeps reading the story. This happens when the author includes enough clues to that plot twist that the reader can go, “Oh, yeah. I saw that coming.” and congratulate themselves for their cleverness while they never saw the plot twist coming at all. It has to be something they can see coming in hindsight but not predict.

A plot twist that comes with no antecedents is not so much of a surprise as a slap in the reader’s face. The reader who scratches their head wondering “Where did that come from?” too often is a lost reader. Do that too often and the reader puts your work down never to pick it or anything else of yours up again because you don’t play fair. You have to provide clues along the way. Ideally, the clues are hidden but observable. My regular readers tell me they love the way I drop clues here and there along a plot line without drawing attention to them. They know my style well enough to know if I drop something in here, it’s going to get used there. Part of their joy in reading my work is figuring out what I dropped and where I’ll use it.

Emotion. Emotion is “Energy in Motion” and once you understand the emotional life of your characters, you can share that with your readers. For example, most people I know want to be loved and accepted for who they are. Show your readers someone wanting to be loved and accepted and the reader’s right there with the character because they’ve had similar feelings and can relate.

It doesn’t matter what someone looks like, their faith, their language, et cetera. In fact, leave that stuff out of your story unless it’s necessary to the story and moves it forward. But whatever and whoever your characters are, give them emotions readers have experienced, put them in situations readers have experienced, and readers pay attention. Put a character in emotional distress due to a familiar situation – the sole provider who loses their job, for example – and readers will pay attention to learn how they should or should have behaved in similar situations.

Example: I’ve rewritten the opening to my current work in progress six or so times. Each was good, but none were satisfactory (I demand a lot from an opening). Each got closer and none were close enough.

Finally I put myself through an exercise designed to fully realize the character who opens the novel (the protagonist). Halfway through the exercise I realized a key element in this character’s psycho-emotive nature which made the opening scene and the entire novel fall into place.

What books do you have coming out next?

FWIW, I have a standing offer to readers: Read Empty Sky, leave a review, and I’ll send you an autographed copy of the new edition when published.

Another publisher has offered to take on my self-published Tales Told ‘Round Celestial Campfires anthology with a generous royalty agreement and they’ll handle all marketing (I pay nothing).

I currently have four novels completely written and waiting for first round editing/rewrite. I tend to finish a project and let it sit for a while—hopefully not thirty-one years this time!—before I return to it for editing. Anywhere from six months to a year works best (for me).

Where to learn more about Joseph Carrabis

You can find most of his published work at http://nlb.pub/amazon (and he wishes you would. He wants to know your opinion of his work, specifically how he can do it better).

He is available online here: