Why I won’t unfriend you despite your abhorrent posts 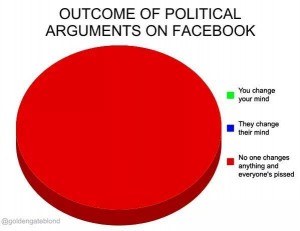 In the aftermath of the Paris terrorist attacks, I read a number of Facebook posts that made me sick to my stomach. Even worse, a number of them were from friends I’ve known for years.

I could have done what some of my other friends have done and blocked and unfriended people who made posts like that. I could have invoked Godwin’s Law and called them a bunch of knuckle-dragging Nazis. Instead, I scrolled past those posts. I didn’t do it because I was afraid of confronting them or to give them my silent consent. I did it because I didn’t want to be part of the problem.

In my early twenties when I was young, broke, and scared, I hated people whose political views were different from mine. They backed policies that I considered a threat to my well-being, so I considered those people a threat as well. I wound up saying things that I regret, and I turned away from people who could have helped me. I came to realize how wrong this was. I also realized that I can’t expect others to respect my views if I didn’t respect theirs. I didn’t have to agree with them, but I owed them the courtesy of listening.

With this in mind, I hope all of you who expressed hateful views about Muslims and Syrian refugees will now listen to me.

What you expressed isn’t just abhorrent, it is dangerous. You are playing right into ISIS’s hands. ISIS wants you to block Syrian refugees from coming into our country. They extort “tax” revenues from those people, and they want to scare them into staying in their “caliphate.” ISIS wants you to hate Muslims. They want to convince them that the West is their enemy so that they’ll join their cause. ISIS wants you to elect unhinged, fear-mongering political candidates who will blunder our country into the Armageddon they deeply desire. If ISIS can elicit such a hysterical reaction from us over the murders of 130 people on the other side of the Atlantic, imagine what we might do if they attack us? We may have made ourselves an even riper target for their violence than we already are.

These aren’t merely my opinions or the mumblings of kale-and-quinoa-munching liberals. These are the goals ISIS states in their propaganda. If you don’t believe me, see for yourself. (Contains NSFW language and images and the sad fact that comedy websites are the only remaining source of objective journalism.) You can dismiss such as ideas as naive, but you can’t ignore the facts and common sense.

ISIS can’t defeat us through violence alone, and they know that. They can defeat us by making us fearful and paranoid, to sow discord and division, and to cause us to turn on each other. Every time you express hatred for people who don’t share your religious and political views, you help edge ISIS closer to victory. America has proven to be unbeatable when we come together because of (not in spite of) our differences. Our diversity gives us a powerful advantage over societies that are locked into one way of thinking. But if we become fearful and hateful of those differences, we’re doomed.

The War on Terror, like the Cold War, is a war of ideas. Some of it may have to be played out on the battlefield, but the true battle will take place in people’s hearts and minds. I still have no doubt about which side will win, but we have to hold the high ground. We have to offer the hope that our enemies want to deny to others. We have to model the type of free and inclusive society that offers a better alternative to theocratic tyranny. The only way we can beat them is to respect each other, embrace differences instead of fleeing from them, and realize our unity as Americans.

That’s the main reason I won’t unfriend you despite your abhorrent posts. But I urge you: don’t give in to your fears. Don’t allow bigots, political extremists, and publicity hounds to manipulate you into distrusting and hating your friends, neighbors, and other patriotic Americans. Don’t let ISIS win. We are only strong when we work together.