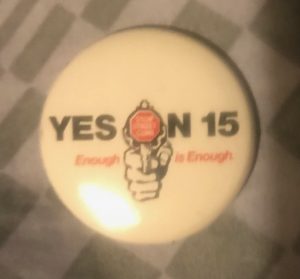 When the March For Our Lives tour came to our area, I had to go. I wanted to hear their stories, learn more about the issues, and find ways I can help. But there was one thing I wanted to do if I were to meet one of the students from Marjory Stoneman Douglas High School. I wanted to give them Tommy’s button.

In our family’s very political year of 1982, my brother got involved with Proposition 15. This measure would have required the registration of handguns, restricted guns from being imported into the state, and prohibited the purchase of handguns by mail. We were all in with this measure. We even had a campaign organization meeting in our living room.

This proposition mattered to my brother because of his friend from school, Tommy Throupe. Three years earlier, Tommy’s father shot him to death along with his mother and his siblings before he turned the gun on himself.

The issue mattered to me too because I was robbed at gunpoint. I could have just as easily become a tragedy like them. But it was because of Tommy that we got involved. We wanted to prevent similar tragedies from happening again. The Yes on 15 button was his button.

The NRA opposed the proposition, of course. They pumped $5 million ($13 million today) into the No on 15 campaign. The measure was defeated at the polls.

I found Tommy’s button when I was cleaning the garage a few months ago. I wanted to give it to one of the Stoneman Douglas students to let them know that they are not alone in this struggle. We’ve been fighting for common-sense gun regulation for a long time. We’ve always maintained that the Second Amendment doesn’t mean a gun should be easier to buy than a car, and it’s worth gun buyers going through some inconvenience to keep families and communities (as well as themselves) safer. I wanted to express my hope that these students would be the ones to complete the work that so many struggled to do for so long.

David Hogg was at the event that day. When I had the chance, I gave him Tommy’s button and his story.

Social progress — from women’s suffrage to civil rights — are generational movements. It takes time to make necessary changes against stubborn opposition, deeply ingrained beliefs, and well entrenched power structures. We go as far as we can and pass the torch to the next generation to further the work. We tell them our stories, remind them why this matters, and give them our support.

We have murals, orange ribbons, and wrist bands of every color to remember the people who were needlessly taken from us. Now, there is Tommy’s button.