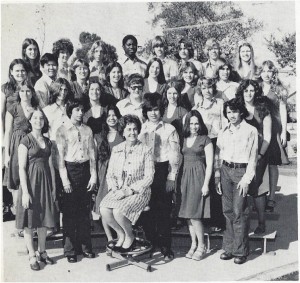 Benjamin Britten’s A Ceremony of Carols was the hardest piece of music I ever had to sing. It had unfamiliar melodies, tense and discordant harmonies, and Middle English lyrics. (It did help me when I studied Chaucer, though.) When I had to tackle it in my first year in the Reseda High School Vocal Ensemble, I thought I was in over my head.

I had been singing choral music for a few years before I came to Reseda, including three years in junior high school under respected maestro Albert Mayes. But when I came to Reseda, I had to try out to get on the Vocal Ensemble. I had to show that I could sight sing and carry a pitch. Even though I made it to Vocal Ensemble, it became clear who the superstar singers were. (And as you recall from “Monotone Angel,” I wasn’t one of them.)

A Ceremony of Carols pushed my musical abilities. I had all of my skills tested at once — holding my notes in tight harmonies and pronouncing those weird words that sounded like English, but not quite. Adding to the pressure: We were scheduled to sing at the prestigious Wilshire Ebell Theatre, a step far above that junior high school auditorium where I used to sing. But we did it! We were able to tackle that difficult piece of music, and we even had a harp accompaniment.

When I sang A Ceremony of Carols, I felt like a serious musician. I would never again doubt my ability to hold my own in a choir.

My favorite song in A Ceremony of Carols was one I didn’t sing — “Balulalow.” Its haunting melody and backing harmonies, and words that are both familiar and strange, all give it an ethereal quality. Our soloist was Cathy Fries (now Catherine Fries Vaughn). It’s a beautiful song that still sticks with me. Once you listen to it, you won’t forget it either.