This was a speech I was going to give in the Humorous Speech contest in Fall 2001, but I have no record of giving it. It’s possibly because I would wear a junky t-shirt and baggy shorts to give this speech. With the exception of the Reseda High School Class of 1979 shirt shown, all of the shirts I used as props in the speech are gone. So is the thin physique I had that enabled me to wear them.

For all of you ladies, and for you gentlemen who have more sartorial taste and self-respect than I do, there is a reason why we wear junky shirts like this. These shirts tell our life story. You can learn everything about a man from the shirts he keeps in his drawer, or at least the shirts his wife doesn’t force him to donate to Goodwill.

I will share the story of my life as it is told by the t-shirts and other shirts I’ve had over the years. 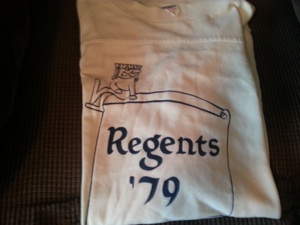 Here is the shirt I got from my graduating class at Reseda High School. You might think it’s pathetic for someone to hold onto a shirt since 1979, but check this out — it still fits! Of course, I spent nearly $300 at Weight Watchers to get thin enough to wear it, but hey, it’s a special shirt.

You won’t believe how hard it is to pick up women wearing a t-shirt like this. I went to a basketball game at the Inglewood Forum where I met this rather good-looking member of the Yugoslav women’s basketball team. I thought I’d strike up some friendly conversation. I said, “Hello, welcome to America.”

The translator said, “I’m sorry, but Comrade is very tired after the basketball game, and she is very smelly, and would you please go away?”

Well, so much for the Olympic spirit.

After college, I went to work in the computer industry. There I got a lot of t-shirts. I worked for a computer manufacturer where I got a t-shirt for practically every project I worked on. Computer companies like to give employees t-shirts so they don’t have to pay them overtime, you see. It’s their way of saying, “You worked 120 hours a week for weeks, broke up with your girlfriend because you spend all your time at your job, and had to miss your mother’s funeral, but here’s a t-shirt.”

I can also tell how well a company is doing by the quality of shirts they give away. At one software company, I got the best polo shirts of any employer. They had thick pique fabric, expert embroidery, and attractive designs. When it merged with another company, the quality of the polo shirts wen downhill. So did the company.

Another place I worked at got into a legal dispute over the company name. So, I wasn’t able to wear a shirt legally anymore. It was a shame because it was a nice shirt.

As you can see, you can learn a lot about a man from his collection of t-shirts. You can learn where he worked, what he accomplished, and what he went through. From my shirts, you can learn one other thing: I’m a nerd.