What “Keep Calm and Carry On” really means 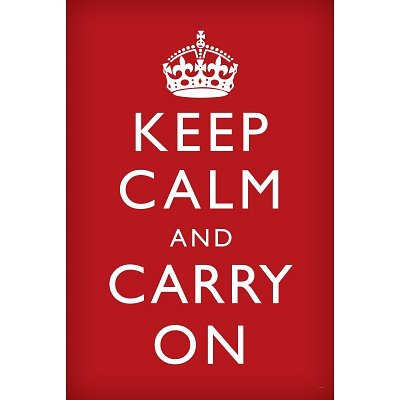 It is a 73-year-old meme. My son has a copy of it on his wall. There have been countless parodies of it. (My favorite is the blue Cookie Monster one that says “Keep Calm and Eat Cookies.”) But what does “Keep Calm and Carry On” really mean? When you look at the history of the poster, you’ll see it is not merely a suggestion to mellow out.

According to Wikipedia, the poster was originally published in 1939 by the British government when war with Nazi Germany seemed imminent. The posters were to be used, as quoted in Wikipedia, “in order to strengthen morale in the event of a wartime disaster.” Specifically, the poster would be used in the event of a German invasion of Britain. Since the invasion never happened (except in the Channel Islands), the poster had limited circulation.

“Keep Calm and Carry On” is the rallying cry of the worst case scenario. (A modern equivalent would be “Cheer up, the Worst Is Yet to Come.”) It’s the response one would take when you have no other ways to respond. It calls for patience and determination. It urges people to bide their time without losing hope and to show restraint without giving up.

From this perspective, “Keep Calm and Carry On” requires much more from us than to relax. It requires resolve. It’s a spirit expressed by Britain’s wartime leader Winston Churchill:

We shall not fail or falter; we shall not weaken or tire. Neither the sudden shock of battle nor the long-drawn trials of vigilance and exertion will wear us down. Give us the tools and we will finish the job.

It is through this resolve that we become calm. We can find peace knowing that we can outlast our difficulties, overcome our obstacles, and stand up to those who wish to do us wrong. The calm comes when we stop bemoaning our circumstances and focus on how we can endure them.