It’s a small world after all 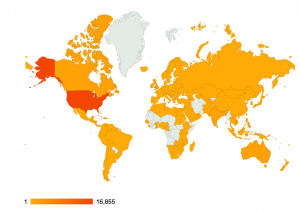 The map you see here are the countries where people visited my Web site from 25 February, 2011 to 28 December, 2012. The shades of red and orange indicate the number of visitors. The United States has the most, followed by the United Kingdom, Philippines, Australia, Canada, India, New Zealand, and Malaysia. The countries in gray are ones where I had no visitors. A few are not surprising, like Greenland. But Paraguay? Hey, I wrote a novel about South America! (Well, it is in English. I better start saving up to do translations.)

Seeing the number of visitors I have from around the world makes me feel grateful and humble. It also gives me a sense of responsibility.

We live in a world that is both more connected and more divided. The Internet enables us to form communities with others around the world. Yet, too many of these communities become insular. Read the comments section of any online news article. Look at the factions that emerge and how they fight each other. Some posters will add links to news articles to prove their point, but those are to Web sites that just reinforce opinions they already have.

As a teenager, I was amazed to read in National Geographic about isolated “stone age” tribes that were “cut off from civilization” and “clung on to their primitive ways.” Oh, how superior we “civilized people” were to those “isolated backwards tribes.” Yet, we civilized people are becoming even more isolated than those who have never seen a smartphone. We join online forums with people who agree with us, read “news” from Web sites that tell us what we want to hear, and dismiss outsiders or even members with dissenting views as “trolls” and “haters.”

The new tribalism has serious and sometimes tragic consequences. It prevents discussion and the give-and-take that can bring about solutions. The unhinged members of the tribe may even turn their verbal warfare against the “haters” into physical violence. We have seen this too many times lately.

It doesn’t have to be this way. The map shows us that. It shows that all of us can make a difference.

If a middle-age guy typing away on his laptop in the United States can reach that many people, so can you. You have the same ability to connect to others that I do. What matters is how you use those connections. Use those connections to further your understanding. Seek out viewpoints that challenge you. Learn how to listen and express yourself effectively. Stand up for your beliefs, but respect the beliefs of others. Use these connections to reach out, not to entrench yourself in communal prejudices and fallacies.

It is a small world, after all. It can be a better world if we see ourselves as part of a global community, not as isolated tribes.