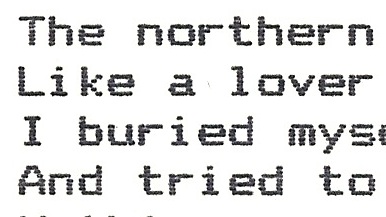 I was digging through some old files, and I found two poems I wrote as a student at Cal State Northridge in the 1980s. These are from a class I took that was taught by Eloise Klein Healy. She gave me great advice. I submitted these poems to the school’s creative writing magazine, Northridge Review. They weren’t published then, so I’d like to share them with you now.

I wrote the first one after a girl broke up with me. The setting came from a barren strip of dirt under the power lines near her house.

The northern wind strokes my hair
Like a lover I knew.
I buried myself in her sandy arms
And tried to sprout roots.
Nothing grew.
As the dry and balding scalp with blond grass
I stand upon,
She was barren.

I scoop up a warm mound of dirt.
It caresses my hand
As she once did
Then dissolves into grains.

She has not yet dissolved.
She is solid
Like wind.
She embraces me with cold, transparent limbs,
Then vanishes into air
Like a memory.

The wind gradually vanishes
And leaves a breeze.
Sand grains remain
In the lines of my palm.

This poem was inspired by reading The Sound and the Fury and listening to poets (including Black Flag’s Henry Rollins) at Bebop Records in Reseda.

“Caddy smelled like trees,” he said,
And I knew I had to find him.
I took the next jet to Jackson, Mississippi
Where I saw him huddled in the corner
Playing with a dead flower.
He smelled like saliva and urine and little girls’ giggles.
His hollow moan rolled
Like golf carts across his childhood pasture.
I smelled the trees too.

I knew I had to take him to L.A.
I booked him at Bebop
Where it smelled like records.
He drooled on himself and began to bellow.
I didn’t know if it had been his sound
(Or the three bongloads of badass Mendocino)
Or the millions of cars that rolled outside
Like golf carts,
But we all smelled like trees
And sprouted leaves
And peeked over the shoulders of continents.
We drew the earth through us like a reed
And knew it signified something.
We were a forest,
Except for a critic (in the back row) from the Los Angeles Times
Who smelled like paper.