Taking no for an answer 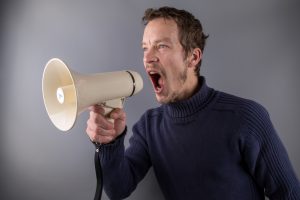 It was a special day for my son. After over a year of hard work and saving, he bought his own car. It was the model he wanted with the features he needed at a reasonable price that he could afford. But one thing marred the day and could have caused the deal to fall through.

As the car was prepped, we were led to the financing department. We had the checkbook ready and our pens poised to sign our names in dozens of lines, but the finance manager had to talk about the extended warranty. I’ve been driving cars for forty years, so I knew all about extended warranties — and I didn’t want my son to waste his money by getting one. As a courtesy, I let him go through his pitch, even though the paper he put in front of me showed exactly how much more my son would have to pay for the plan. At the end of his talk, my son looked at me, and I politely declined.

That should have been the end of it, but the finance manager persisted.

He used all of the sales tactics. He asked why I objected. He tried to show me how much repairs could cost as cars got older (even though he used his luxury car as an example while my son got a compact). I declined politely each time. And politeness became increasingly difficult, especially when we were at the dealership for three or four hours and hadn’t eaten lunch. Even when he wrote “Decline” on the order form, he kept pushing us to change our minds. When he talked about the long-term relationship he wanted us to have with dealership, I said something to the effect of “If you value our long-term relationship, it would be best that you accept our decision.” He stopped his pitch and thanked us for our patience.  We filled out the rest of the paperwork and wrote the check. But even as we were waiting to take delivery, he brought it up again and told me how it would help my son build his credit. I told him he was already doing that. By then, the car was ready, and we could escape the finance manager.

Later, my son told me how much he appreciated my patience. He said, “If I had to deal with this myself, I would have walked away from the deal.”

That’s why you need to learn to take no as an answer. Sure, car dealerships make a lot of money on extended warranties. But they also make money on service, repeat business, and recommendations from satisfied customers. An overzealous salesperson appears desperate and unprofessional. It makes customers feel disrespected, and that the company only values them for their money. Respectful salespeople build relationships even if they don’t close the deal or get everything they want. Customers would consider them in the future or recommend them to others from the good experience they had.

I practice this too.

A publisher rejected a manuscript I submitted. I thought it would be something they would like, but they took a pass on it. So, I wrote back to the owner who reviewed the manuscript and thanked her for her time and consideration. That’s it. No begging. No arguing. No losing my temper. Why waste time getting upset about rejection when I can make my manuscript better. I also know I have other options. I could submit it to other publishers or publish it myself like my other books. I take the no and go on.

And that’s what you need to do when selling. If you’re getting frequent rejections, use the experience to improve the quality of your pitch and the services and products you’re offering. But don’t jeopardize your business by coming on too strong and alienating your customers. Taking no for an answer, and learning from the no, will lead you to a yes.