How to tell the truth 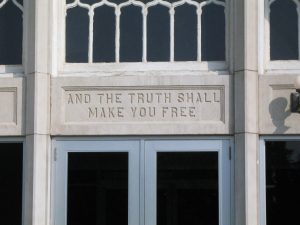 Lying is easy. We’ve been lying since childhood when we were first caught doing something we know we shouldn’t do. In time, we got so good at it that we believe the lies we tell ourselves.

Telling the truth is hard. It requires that you make yourself vulnerable, own up to your flaws and mistakes, and face the consequences of your actions. Even harder is to convince others that we are telling the truth. People are so used to lies that they distrust true sincerity. How do we tell the truth?

Commit yourself to honesty

The first step is to decide that you’re going to be open and honest about everything. You can’t go halfway by telling just enough truth to make yourself look good and lie about the rest. A partial truth is still a lie. You either have to be willing to reveal everything and face the consequences or don’t even bother. You will find that once you open yourself up on one thing, the truth will just pour out of you. The truth really does make you free.

Get your facts straight

The next step is knowing what the truth is. Our memory gets hazy, and we lie so much to ourselves we don’t even know what the truth is. Do your research. Gather the details. Question your assumptions. Deflate your ego. Make sure you know and understand the facts before you present them.

In the United States and other countries, direct eye contact is a sign of sincerity and honesty. When you look away or avoid eye contact, it is interpreted as dishonesty or covering something up. Maintain eye contact when speaking the truth, even if it is uncomfortable or culturally different for you.

By that, I mean no “I swear to God!” and “I swear on the my mother’s grave!,” as well as “What makes you think I’m not telling the truth!?,” “When have I ever lied to you!?,” and “If I’m lying, may lightning strike me dead on the spot!” The more you protest your truthfulness, the more people question it. If you speak the truth sincerely and accurately, people will know it’s the truth without you telling them.

This is the hardest part of telling the truth, especially when you know the consequences of your actions. Coming clean with them won’t reduce or eliminate those consequences, but at least you won’t suffer the additional consequences of lying about them. Admitting your mistakes is the first step towards making things right and seeking forgiveness. Lying about them makes such things difficult or impossible.

Admit when you don’t know

This is hard in a professional setting where we’re expected to know the answers. We’d rather make something up or obfuscate than run the risk of looking foolish for not knowing. This makes the situation worse because people can run into trouble by using the bad information you gave them. It is better to say, “I don’t know. I’ll find out for you as soon as I can.”

The word “but” can undermine the most sincere confession. That’s because it’s usually followed by some excuse or assignment of blame. “I wasted $50 on that shirt, but it seemed like such a good deal.” Or “I was late on that report, but it was all Jenkins’ fault.” Take ownership for your actions. Even if there was some legitimate problem, it was still your responsibility to either do the right thing or find a way to mitigate the situation.

What if you’re confronted with information you know isn’t true? It’s easy to argue, talk over the other person, shout, and attack. These just throw more doubt into your answer. Listen to the accusation carefully and acknowledge what the other person said before you respond. This way, you can understand the details of the accusations against you and how the person feels about them. “I can understand why you feel I’ve been ignoring you and how it upsets you. I’d like to explain why I haven’t been able to respond to you as quickly as you want.”

Make honesty a way of life

With all this talk of “alternative facts,” it seems that lying has become acceptable. Politicians can say whatever pops in their heads, and they expect us to accept it as gospel. But as President John Adams once said, “Facts are stubborn things; and whatever may be our wishes, our inclinations, or the dictates of our passion, they cannot alter the state of facts and evidence.” The truth will come out. So, we are better off committing ourselves to honesty. By expressing the truth and expecting it from others, we can begin to make a more honest world. The truth shall make us free.