How to offend people 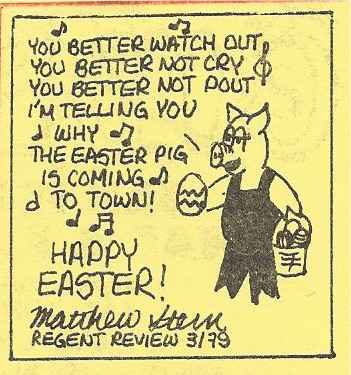 This cartoon caused a firestorm on a social media site. I drew this cartoon for my high school newspaper, the Regent Review, in 1979. When I posted it recently, someone wrote a comment that offended a lot of people (including me). Someone got so upset, he demanded that I delete the post or he would report it to the administrator. I wound up deleting it.

The situation left me with questions. How do we offend people and can we express ourselves without offending others?

Some actions are obviously offensive. If you use racial slurs, verbally attack others, and generally act inappropriately, you will offend people and deserve the inevitable condemnation. Some actions aren’t so obvious, and the offended parties won’t tell you what you did to upset them. Their usual reply is, “If you don’t know, why should I tell you!?” What they really mean is, “If you had empathy and common sense, you would figure out why that offended me.” But empathy and common sense don’t always uncover the source of the offense.

In the case of the cartoon, someone saw it as an opportunity to write something horrible about Muslims. I still don’t fully understand how Easter + pig = hatred of Muslims. Sure, pork products aren’t on a Muslim’s menu, but they shouldn’t be on my menu either. (That’s hasn’t kept me away from the siren song of bacon.)

At the time I drew the cartoon, I had a different connection between Easter and pigs. It started off as a cartoon a teacher drew on a blackboard. As a Jewish person, I got the joke. Ham is an Easter food, like turkey is a Thanksgiving food. “Get your Easter ham” was on supermarket ads every March or April. It was if Christians were saying, “Your Seder looks delicious, but Easter’s our holiday. So, we’ll indulge in our favorite non-kosher meat, if you don’t mind.” Just as I didn’t take offense to Christians celebrating Christmas, I didn’t mind them celebrating Easter (except for those who blamed us causing the Crucifixion that led to Easter).

I also didn’t mind Muslims. Twenty-two years before 9/11, I could have been angry with them for the various Arab-Israeli wars, Munich, and those long gas lines. I could have, but I refused to. I didn’t want to condemn others for their religion just as I didn’t want others to condemn me for mine. I still feel that way. The connection Easter + pig = hatred of Muslims didn’t exist for me then and doesn’t exist for me today.

Still, the connections we don’t expect usually cause the greatest upset. I recently saw a Family Guy episode where Peter Griffith had a stroke. My mom had a stroke, so I didn’t find that episode particularly funny. The same thing must have happened with my cartoon. Someone had a prejudiced attitude towards Muslims, and the cartoon triggered a reaction. Because he made that connection, he caused others to be offended too. I wonder if people would have been as offended by my cartoon if he didn’t make that horrible comment. But once he made that comment, the connection was too strong to be ignored.

The lesson is that we don’t always know what reaction we’re going to get when we express ourselves. We should be careful not to say or do anything inappropriate or intentionally hurtful, but that doesn’t guarantee that there won’t be someone who takes offense. Sometimes, our mere existence can offend someone, as Muslims do for that man.

This is why we can’t silence ourselves to avoid offending someone. No matter what we say or how carefully we say it, someone will be offended. If we’re lucky, it will be someone who deserves it.