A year with a MacBook Pro 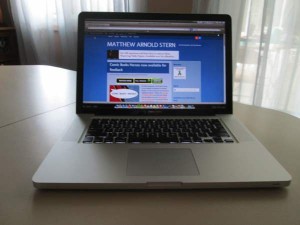 The true test of a purchase is if you are still happy with it a year after you bought it. My MacBook Pro passes that test.

I bought my refurbished early 2011 MacBook Pro last year after using Windows computers for over 20 years. My computer still runs as well as the day I bought it. Although it has a few scratches and no longer has that new computer smell, it looks as good as the day I took it out of the box.

I have to compare my experience with the MacBook Pro with the experience I had with my previous laptop, a Dell Studio 15, which I bought in April 2009. Two months after I bought it, I had to contact Dell Technical Support about a problem that I had with the optical drive. In October, I had problems with my keyboard. In August 2010, the plastic broke around a hinge. I had to send it back to Dell, which required two weeks to fix. I had to contact Dell again a month later because of additional problems with the keyboard.

In comparison, the only time I had to bring in the MacBook Pro was because a small leaf blew under a key on my keyboard. I took it to an Apple Store where a guy at the Genius Bar vacuumed it out at no charge.

Reliability isn’t the only reason I still enjoy my MacBook Pro. I like the range of creative and business apps available for the Mac, some of which are available for free or at a low price. I’m writing my new novel with Scrivener by Literature and Latte. Although it is also available for Windows, the Mac version has more features. Another handy program is Image Smith by Koingo Software. I use it to convert photos from our new 16-megapixel camera to a more manageable size for uploading to the Web.

The MacBook Pro is the most portable laptop I’ve had. It’s light enough to put it in my backpack and carry it around without straining. It has excellent battery life. I can work on it for hours without recharging. I can also use it outside under a good amount of shade, and the screen is still readable.

My only gripe about the MacBook Pro is how Time Machine affects performance. I notice lags whenever the Time Machine icon starts turning backwards. I back up my laptop to an external Seagate drive over a WiFi network, which isn’t the fastest method of backing up a drive (but it is the most convenient). Still, I’d like to have less lag on my computer, even if it means the overall backup takes a little longer.

Overall, I’ve been happy with my MacBook Pro. It does what I expect from good technology — to do its job well with a minimum of fuss.