What is bad technology? 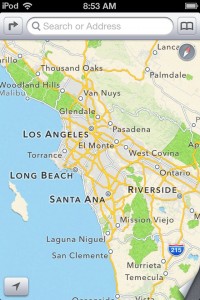 As Americans, our favorite hobby (next to eating and blathering on about complex issues we don’t understand) is knocking down the successful. We love it when celebrities get caught improperly using automobiles, or showing parts of their bodies that they probably shouldn’t show, or otherwise acting nuts. It’s part of the bizarre tabloid morality play we use to reinforce what we consider right and wrong.

Which brings me to the Apple Maps debacle.

I’ll say something that may offend and shock most of you: Apple Maps really isn’t that bad. Really. For the things I need it to do, it does it well. It even offers some pleasant surprises like useful turn-by-turn directions. I also like how it shows my present location, even though I have a WiFi-only fourth-generation iPod Touch.

So, why all the hate about Apple Maps? Why the dire proclamations and Mapspocalyptic declarations of Apple’s doom? Why is it considered so bad that Apple CEO Tim “I’m Not Steve Jobs, So Everything I Do Is Wrong” Cook had to issue a public apology?

I’ll answer with this question: Would Apple Maps have been such a publicity disaster if Apple wasn’t so successful?

Over the years, I’ve worked on and worked with some pretty sketchy products. Some would crash if you looked at it long enough. One of the basic rules I’ve learned over the years: Version 1.0 products (meaning the first version of a new release) always have problems.

Remember Windows 95? People lined up when it first shipped, the same way they do with iPhones today. It took two service packs and Windows 98 (and a couple more service packs after that) before it became solid. Remember Android 1.0 or whatever sugary treat they used to name it? Google is now up to Android 4.1, and it still has issues.

I could tell you about all the products that I’ve worked on in the past that got pushed out the door half-baked and needed several releases to get them right. It was so bad at one of my past employers that we joked, “If it boots, ship it. If it doesn’t work, ship a service pack.”

Apple Maps is a version 1.0 product. Of course it has problems. And of course, it will get better with each new release and as users submit corrections. But from my experience, it isn’t worse than any other 1.0 product I’ve used over the years. And compared to some of the 1.0 products I’ve used, Apple Maps is actually better.

It’s never a good idea for technology vendors to ship half-baked products, and companies that do it too often don’t last very long. But it happens, even to the best of companies. Point to a successful company with world-class products, and you’ll find a dozen or so products that didn’t make the grade. Remember Microsoft Bob? Windows Vista? And how many products has Google tossed out over the past few years?

To put Apple on a different level than other vendors seems unfair. To point at every misstep as David’s stone the fells the $700/share Goliath isn’t careful reporting. It’s playing paparazzi and hoping for a young star to have a few too many at a nightclub.

No, I haven’t become a fanboy since I got the MacBook Pro. I just know the difference between good and bad technology. Anyone can produce bad technology, and the good companies fix or remove it. But it takes a bad reporter to gloat about it.