Why cover social issues in fiction? 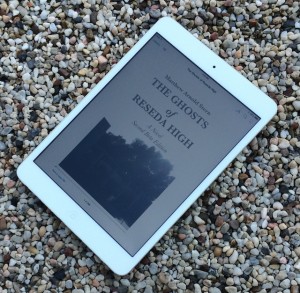 During beta 2 of The Ghosts of Reseda High, I will post spoiler-free commentary about issues and themes I cover in the book. This is the sixth of the series. The survey is now closed, but you can still download the beta. Use the form on the download page to send any feedback you have.

As you would imagine, The Ghosts of Reseda High is about teenagers and high school. (And possibly ghosts.) It also covers economic inequality, race, immigration, crime, drug abuse, the state of public education, and the aftereffects of genocide. Why is all that stuff in there? Can’t we have a nice coming-of-age story with karate or some kid who gets magically transported to King Arthur’s time?

It has to do with setting.

Setting isn’t just the physical surroundings. It must also include the conditions and culture of the place. Consider the Adventures of Huckleberry Finn. It’s not just about Huck and Jim floating lazily on a raft down the Mississippi. The book is all about life in the antebellum South, along with its slavery, class divisions, and toxic romanticism. If you take those elements out of the story, you not only miss Twain’s point in writing the book, but you would miss key factors that drive the plot.

Conditions and culture make a setting seem more real and characters more engaging. In Slumdog Millionaire, religious tensions, extreme poverty, and India’s jolting economic growth make the characters’ struggle more understandable. We root for Jamal because we can see how cultural conditions put him in the situation he is in and create obstacles he must overcome. They also give a strong sense of place. We can feel what life is like for the poor in India and witness the changes in the country during Jamal’s life.

Although social conditions can add to a story, it’s important that we don’t present them heavy-handedly. If so, they can overshadow the characters in the story (the way the depiction of the meatpacking plants did in Upton Sinclair’s The Jungle). Or worse, they can turn a story into tedious agitprop (like almost every book by Ayn Rand).

I couldn’t write about what it’s like being a teenager in 21st century Reseda without writing about the social, economic, and political issues that make life challenging. They are as much a part of the setting as the dirt trail in Reseda Park or the metal pipes in the apartment building. My challenge is to give enough of this information to make the story real without making it overly political. How did I do? Read the beta and let me know in the survey.