Don’t know whether to laugh or cry 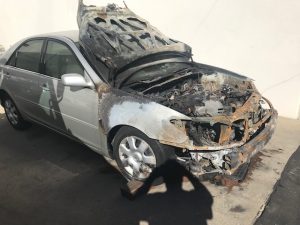 We had the most 2017 thing happen to us. The car we gave our daughter caught on fire. We will never know why. She had been taking it in for regular service and had a smog check done on it recently. But as she was driving with a friend, the car began to rattle and smoke. She pulled over to the side of the road. She and her friend got out just before the engine burst into flames.

We’re not talking about my mom’s 1960 “unsafe at any speed” Chevrolet Corvair or my 1974 “glorified Pinto” Ford Mustang II. This was a 2003 Toyota Camry. A Toyota Camry. Many cars of this model year are still on the road. And ours gave us 15 years of dependable service before its self-immolation.

After the fire, we felt a jumble of emotions. We feared for our daughter’s and friend’s safety. We were relieved when they were OK. We were happy when our daughter replaced the Camry by buying her first car. But we were upset that she is now burdened with car payments. And we were heartbroken to see a car that was a part of our family reduced to a burned-out shell. I usually turn to humor to deal with a crisis. But whenever I thought up a joke, I became too upset to tell it. I don’t know whether to laugh or cry.

That’s the way we’ve been feeling all year.

We’ve had a number of happy things happen in our family in 2017. Our son achieved his goal of getting his driver license and buying his first car. Our granddaughter now lives with us. We have an enjoyable new spa. Things are going well at work, and I finished a couple of novels.

At the same time, we know that plenty of frightening things are happening in the world. We don’t know what will happen to our health insurance and taxes. We wonder how many retailers will be closing their doors after the holidays and what this will do to the economy. We’re edging closer to nuclear war. We see civility give way to raw hatred. The institutions and norms that form the foundation of our society are under constant attack. When a sliver of hope is dangled in front of us, dozens of cynics, demagogues, and cowards snatch it away. Journalists are dismissed as fake. Comedians have turned into activists.

We don’t know whether to laugh or cry.

In 2017, we feel like we’re standing on the side of the road watching our society catch on fire. We are relieved that we are safe, but we are angry and heartbroken that the institutions and civility we depended on are being destroyed. We maintain hope that the fire can be stopped in time, the damage can be contained, and we can rebuild. But we can’t avoid the sense of uncertainty and loss. We also know the burdens and effort it will take to make our society whole again.

We will recover. We may even come to laugh about our ordeal. But things will never be the same.