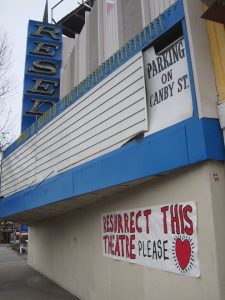 The Mysterious Heart Maker of Reseda struck again. This time, it’s a plea to resurrect the Reseda Theater. I expressed my doubts about whether this theater should be reopened in its current form. I wrote, “The best thing that can be done with that theater is to tear it down and build something new. It’s better for the community to start fresh and entice new businesses than to cling on to an unsafe, unsightly landmark.”

What if I’m wrong? Can the past be saved?

Parts of the theater can be saved or at least reconstructed, especially the iconic “Reseda” sign. If it couldn’t be used for a new Reseda Theater, it could be put at the corner of Victory and Reseda at Reseda Park or on the median on Sherman Way. It would be a great landmark to identify the community. There might be fixtures that are salvageable. The theater as a whole would need to be gutted and rebuilt before it could be used for any purpose. Or it may be more economically feasible to tear the whole building down and build something new, even if it’s a theater. Either way, something has to be done with the Reseda Theater besides just leaving it vacant.

But tearing down the Reseda Theater doesn’t mean the past would have to be forgotten.

This is the case with Gilmore Field, the ballpark where the Hollywood Stars baseball team played 1939-1957. Mom loved going there to watch games. When the Dodgers came here from Brooklyn, the Stars had to make way. The ballpark was torn down and the land was used by CBS to expand its Television City. Recently, CBS, at the request of the Pacific Coast League Historical Society, put a plaque at the site where the ballpark was located. 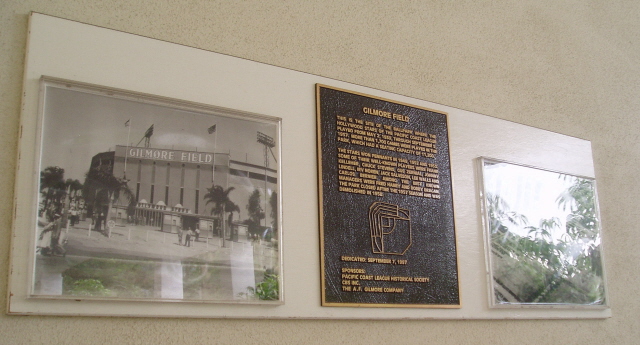 Even though we can’t watch games at Gilmore Field anymore, its memory has been preserved so future generation can learn about it.

I would love to see the Reseda Theater preserved and restored to its past glory. If it can’t, at least we can see to it that its history is preserved and honored.