Your Google controversy of the day

Want to spice up your Valentine’s Day? Add some controversy! Go to Google.com and check out Google’s charming doodle for Valentine’s Day. Click the button to play and watch the doodle all the way to the end.

At the last scene, the doodle shows happy couples in love. 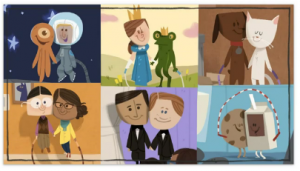 I, for one, am outraged that Google would advocate such an immoral, unnatural relationship. It is an abomination and a threat to traditional marriage. I’m talking, of course, about relationships between humans and extraterrestrials. Sure, it looks like fun on Star Trek, but we don’t even know if space aliens are carbon-based life forms.

Gay couples should be free to marry, which is a perfect sentiment for Valentine’s Day.