Spoons and a lesson about community 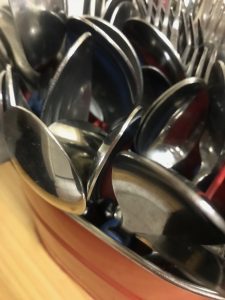 It’s hard to watch the news today without becoming consumed with rage and grief. But we want to believe there is a way out of this rabbit hole. We try to picture an ideal world that we can work towards. But how can we picture such a world when all we see is chaos, venality, and cruelty?

I’d like to offer a story I was told a long time ago. It’s about spoons.

A woman died, and she met St. Peter at the gates. He told her, “You’ve lived a virtuous life, so I’m giving you a choice between going to heaven or hell.”

He first took her to a beautiful dining room. It had pillars trimmed with gold and marble floors. Throughout the dining room were mahogany tables. Embedded in the middle of each table was a large bowl of the heartiest and most delicious soup she had ever seen. But the diners around the table couldn’t reach the bowl. To eat the soup, they had to use long-handled spoons. When they tried to bring the spoon to their mouths, the soup spilled on the table. As a result, everyone around the table was starving, moaning, and miserable.

He then took her to another dining room. It was exactly the same beautiful hall with the mahogany tables, soup bowls in the center, and the long-handled spoons. But here, the diners were well fed and happy. They laughed and had a great time.

St. Peter told her, “This is heaven.”

“I don’t understand.” The woman said, “The two dining rooms are exactly the same. So, why is everyone happy and well fed here, and not in hell?”

She noticed that instead of trying to feed themselves, they were feeding each other.

This is a story about community. When people work together, they can find the solutions to any problem. But it sure seems that the people who are out to feed themselves are winning right now.

Those people have learned how to finesse the spoon so they can get it to their lips. Or they find ways to trick others to feed them, giving a half a spoonful for every ten spoonfuls they get while convincing those people how grateful they should be to serve him. Or they jump to the center of the table, push everyone else out of the way, and lap up the soup like an animal. Eventually, their finessing will cause them to drop the spoon on the floor and lose it. Or the feeders will resent overfeeding their exploiter and fight over who should get fed. Or others will jump on the table, causing it to tip over or collapse.

An “everyone for themselves” world is unsustainable. History shows us what happens when people get tired of being exploited, or when an ecosystem cannot support ravenous consumption. The combination of the two have caused many great empires to fall.

The only way we can survive in a world of long-handled spoons is through community and mutual support. A world based on cooperation and compassion isn’t just ideal. It’s the only one that works.

We see this when disaster strikes. People band together to help one another. This is happening now with those dealing with the wildfires in California. Firefighters come from out-of-state, risking their lives to stop the flames. Volunteers help people in evacuation centers. Victims support one another and share what they have. Cooperation is a crucial survival skill we learned at the beginning of our species. It’s still crucial in an age of smartphones.

The story also reminds us that we can create heaven or hell based on our choices. No one told the diners in heaven to feed each other, and nothing prevents those in hell from changing their ways and working together.

We often choose to create a hell for ourselves because we’re told that we deserve it or this is the way things are supposed to be. Know your place. People like you will never amount to anything. You’re too young to make a difference or too old to change. But it doesn’t have to be this way. By picturing a better world, we can escape the hell we’ve created for ourselves. We don’t have to accept this situation. We can choose better.

Despite everyone telling you we’re in an inescapable hell, we can create a heaven. Just hold out your spoon to feed somebody else.