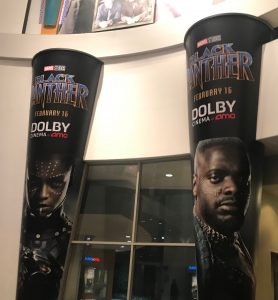 I had the opportunity to see an advance screening of Marvel’s Black Panther in 3-D IMAX. It has everything you would expect from a superhero movie: thrilling action set pieces, brilliant CGI-driven special effects, and a Stan Lee cameo. But what really got me into the story were characters I could care about.

This is lacking in most superhero movies. Both heroes and villains are drawn larger than life with unrealistic powers and motivations. It’s hard to relate to any of them, so you can’t get invested in the story. Even the most action-packed battle sequences seem empty because you don’t care who wins or loses.

Black Panther solves this problem by focusing on character development. (Since Marvel and its fans get fussy about spoilers, I won’t include any here.)

Black Panther shows us the man behind the mask. T’Challa, the hero, has superpowers and array of high-tech gadgets. But he also has love for his family, compassion for others, and human frailties. His earnest goodness, which is often a requisite for superheroes, can also be a weakness. Still, we care about him because of the way he cares about others. He is a person we would want to be.

Where Black Panther also shines is in its main villain. Without giving too much away, this is not the stock “evil for the sake of being evil” character. We understand the person’s motivations, and we can feel the heartbreak behind them. Even as the villain fights on the wrong side, this character does so for what that person thinks are noble reasons — just as the hero does. We wind up hoping that the villain can be redeemed and not just defeated.

These characters bring the fantastic battle sequences to life because we can see the people in conflict. We are brought to the edge of our seats because we care about whether they live or die.

Much has been said about Black Panther and representation, but only because the characters are well-developed and relatable. If Black Panther were an average superhero movie with flat characters who happened to be African, it would be worse than insulting. It might as well be a Tarzan movie or Crash.

Character development matters. By focusing on the man behind the mask, Black Panther has become more than just another big-budget superhero movie. It’s an immersive tale in a fantastic, but human world where we can find ourselves.